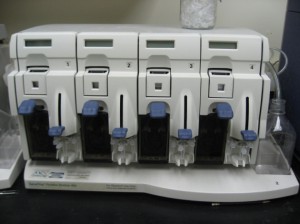 Following dissection of the specific brain regions and subregions, microarray technology and other quantitative tools for analyzing mRNA expression are applied to find sets of genes that are consistently differentially expressed between normal and diseased brains. Microarrays, or gene chips, allow scientists to measure the activity of thousands of genes at the same time. These experiments are done in duplicate by scientists at UM, UCI and UCD to provide replication/validation of results. The Consortium collaborates with Dr. Terry Speed, a biostatistician renowned in the field of microarray analysis, to determine the most appropriate means of analyzing results of the microarray studies.

Dr. Jack Barchas at The Weill Medical College of Cornell University studies allele-specific expression (ASE) of genes in human brain tissue. ASE studies identify differences in the level of expression of genes from each of the two parental chromosomes. When differences are seen one of the two chromosomes must contain a regulatory polymorphism that causes the differential expression. These studies interact with other components of the Pritzker consortium to identify genetic risk factors for Psychiatric disorders.

At the University of Michigan, human, mouse or rat expression BeadChips are scanned on the Illumina BeadStation system. Each chip encodes over 22K gene probes corresponding to over 21K genes. The samples are normalized using BeadStudio and analyzed with Illumina’s error model. Samples that correlate less than 94% with each other are omitted from the analysis. Data can also be analyzed by Ingenuity Pathways Analysis Software.

Quality and quantity of cRNA is determined at the University of Michigan on the Agilent 2100 Bioanalyzer. After amplification, RNA quantity is determined on the Nanodrop ND-1000 spectrophotometer. For validation experiments, TaqMan Low Density Array cards from ABI are custom designed using pre-designed inventoried assays. cDNA samples with greater than 30ng are processed on the 7900 HT Sequence Detection System. Data is analyzed by the relative quantification method in RQ Manager (ABI).