Foundation to honor Huda Akil, Ph.D., for her pioneering research in brain biology, depression and addiction

The Kuwait Foundation for the Advancement of Sciences (KFAS) established the Kuwait Prize in 1979 to support scientific researchers in various fields and to encourage Arab scholars and researchers. KFAS awards prizes in five fields: basic sciences, applied sciences, economics and social sciences, art and literature, and Arabic and Islamic scientific heritage. Recipients, who hail from Kuwait and other Arab countries, receive a cash prize, a gold medal, the KFAS shield, and a certificate of recognition.

Akil will receive the Kuwait Prize for Basic Sciences/Basic Medical Sciences from the Amir of Kuwait, Sheikh Sabah Al Ahmed Al Sabah, during a Dec. 2 ceremony at the Salwa Hall in Kuwait City, Kuwait.

Read the press release at medicine.umich.edu » 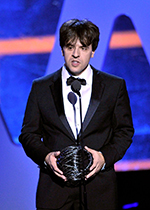 Steve Jennings/Getty Images
The Breakthrough Prize and its founders Sergey Brin and Anne Wojcicki, Jack Ma and Cathy Zhang, Yuri and Julia Milner, and Mark Zuckerberg and Priscilla Chan, tonight announced the recipients of the 2016 Breakthrough Prize in Life Sciences, Fundamental Physics and Mathematics. A combined total of $21.9 million was awarded at the 3rd Annual Breakthrough Prize Awards Ceremony in Silicon Valley.

“By challenging conventional thinking and expanding knowledge over the long term, scientists can solve the biggest problems of our time,” said Mark Zuckerberg. “The Breakthrough Prize honors achievements in science and math so we can encourage more pioneering research and celebrate scientists as the heroes they truly are.”

Carnegie Mellon University will award its 2013 Dickson Prize in Science to Karl Deisseroth, the D.H. Chen Professor of Bioengineering and Psychiatry at Stanford University. Deisseroth is best known for his contributions to optogenetics, a technique that has revolutionized how scientists study neurons in the brain.

The Anna-Monika Prize is awarded bi-annually to clinical scientists who have made major contributions to the understanding of the underlining neurobiological mechanisms of depression and who have advanced the pharmacological options for affective disorders. In 2013, the Anna-Monika-Foundation was again privileged to honor a leading researcher for his groundbreaking work in the field.

Prof. Schatzberg received the prize for his outstanding research into new therapy approaches, especially for the treatment of delusional depression. He is one of the leading North American clinical and scientific psychiatrists. In his research work, he focuses on the interactions between the stress hormone (cortisol) system and dopamine metabolism, both on a basic science basis and in clinical studies. A special merit of Prof. Schatzberg’s work is the early recognition of the significance of antiglucocorticoid therapies, for example with mifepristone (RU486), and their possible introduction into psychiatric practice. This research approach implemented by Prof. Schatzberg and his group was adopted by a number of companies and is undergoing Phase III clinical trials. In addition, Prof. Schatzberg has supported the use of antiglucocorticoid therapeutic methods by systematic neurobiological research, including neuroendocrine studies, genetics, brain imaging as well as studies of cognition and its relationship to cortisol activity. Prof. Schatzberg’s work has contributed both to a better understanding of the pathophysiology of severe depression disorders and to the development of novel treatment approaches.

“When I was growing up in Damascus, the notion that a little Syrian girl could become a scientist seemed like an impossible dream,” she wrote in a commentary for the Washington Times. But the little girl with the big dream is now internationally renowned Huda Akil, Ph.D., Gardner C. Quarton Professor of Neurosciences in Psychiatry at the University of Michigan Medical School and co-director and senior research professor at the university’s Molecular and Behavioral Neuroscience Institute.

A pioneer of what is now called systems neuroscience, Dr. Akil has made seminal contributions to the understanding of the neurobiology of emotions and the interplay between pain, anxiety, depression, stress, and substance abuse. “Dr. Huda Akil’s scientific work has transformed our understanding of the molecular, anatomical, and behavioral mechanisms of emotionality,” said James O. Woolliscroft, M.D., dean and Lyle C. Roll Professor of Medicine at the University of Michigan Medical School.

Read the announcement at AAMC »